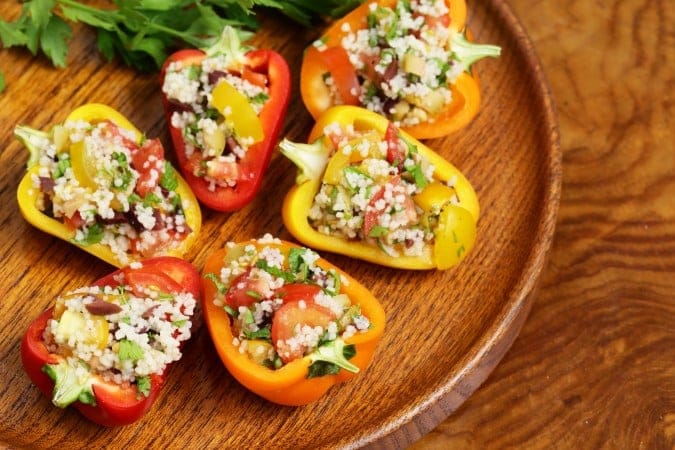 Quinoa is one of those things that I just love. It’s gluten free and packed with nutrients, so I really like to mix up my normal routine and have it as the base of different dishes. These stuffed peppers are a fabulous little snack, side dish or appetizer. It’s a little more work because of all the chopping (especially all those little peppers), but it’s totally worth it. If I don’t already have quinoa made up, I’ll chop all of the veggies and do all the prep while the quinoa is cooking. While the recipe calls for cocktail tomatoes (also called Campari, they’re typically the “tomatoes on the vine” you find), you can use Roma tomatoes, instead. I wouldn’t recommend grape or cherry tomatoes, since they don’t chop up into small pieces as easily. Also, you have to remember that the mini peppers you’re using are tiny – so chop small. I ran into that problem, and had to do a little more chopping. You can also take a couple of the peppers and chop them into the quinoa mixture (like I did). These peppers are great to take to a potluck or have at a party. They’re small, tasty and easy to handle. I love these little peppers, they’re pretty and delicious!