Who doesn’t love apple desserts? Especially when they’re wrapped up in light and flaky dough. One of the down sides of most apple strudel recipes is that they use either puff pastry or pie dough for the outer wrap. While they’re both delicious, they’re also really high in calories and fat. In my recent quest to find a good alternative, I happened across the delightful Phyllo dough. I’m enjoying playing around with it, so I decided to try the traditional apple strudel recipe as an apple wrap with phyllo dough instead of pastry dough. It was delicious. It’s even more light than the traditional strudel recipes. Typically, the strudel is a little more heavy, dense and rich. This is light, sweet but still tart and really delicious. I have to stop myself from eating more than I should of this one. I love the contrasts of the tart, crisp-tender apples and the light, flaky dough. It’s delicious, easy and I’ll definitely be doing this one again. 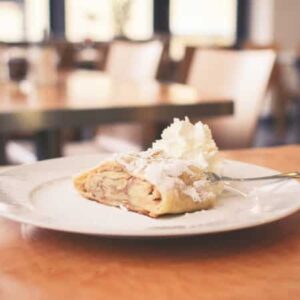 A lighter, flakier and healthier version of the traditional apple strudel. This wrap is made with quick and easy phyllo dough, but the tart, crisp-tender apples lend the perfect contrast to the light and flaky dough.
No ratings yet
Print Recipe Pin Recipe
Prep Time 15 mins
Cook Time 15 mins
Total Time 30 mins
Servings 8 people
Calories