I love to experiment with Quinoa in a variety of recipes. It’s so good for you, and I really enjoy the flavor and texture.

When I used it instead of couscous in a traditional Tabbouleh recipe, I was thrilled with the end result. The calorie and fat content were less and the protein and fiber were higher.

For those of you who may be unfamiliar with Quinoa, it’s a South American grain, originating in the Andes. It is loaded with protein, rich in phosphorous, magnesium, and iron, and has a mild, nutty flavor. Quinoa is a great idea for a lighter and healthier alternative to rice, couscous, and bulgur – and it’s gluten-free.

If you love the flavors of Middle Eastern salad recipes, like the traditional Tabbouleh recipe, give this version with quinoa a try instead! 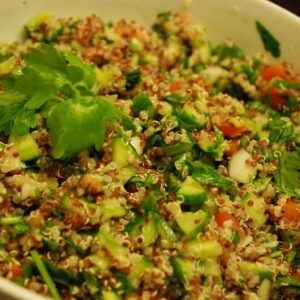