Swiss chard recipes always frightened me…something about cooking leaves just made me feel like I would mess it up.

Granted, I’ve cooked spinach, but Swiss chard just sounded so much more complicated. I knew it was incredibly good for you – in fact, it’s considered to be one of the healthiest vegetables available and valuable addition to a healthy diet, so it was something I did want to try at some point. And since some arrived in my Farm Fresh to You box this week, I decided now was a good time to take a stab at preparing a simple sauteed Swiss chard recipe.

I did a bit of research and decided that keeping it easy was the way to go – a few simple ingredients with lots of flavors.

The end result was a wonderfully delicious sauteed Swiss chard full of color and taste. Despite my poor photo (which was taken with my iPhone instead of my regularly used Nikon), it was incredibly tasty, and each serving was just 1 Point. It was so good, in fact, that it encouraged me to also try my hand at collard greens for the first time, which was another leafy vegetable recipe that intimated me. That one turned out pretty good too and will be posted here later this week!

If you are a lover of leafy greens, fill your plate with some of this delicious, yet terribly easy, Sauteed Swiss Chard Recipe. 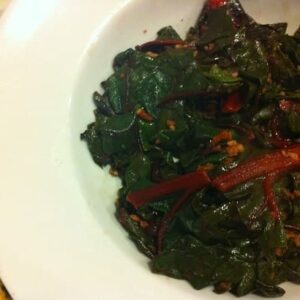