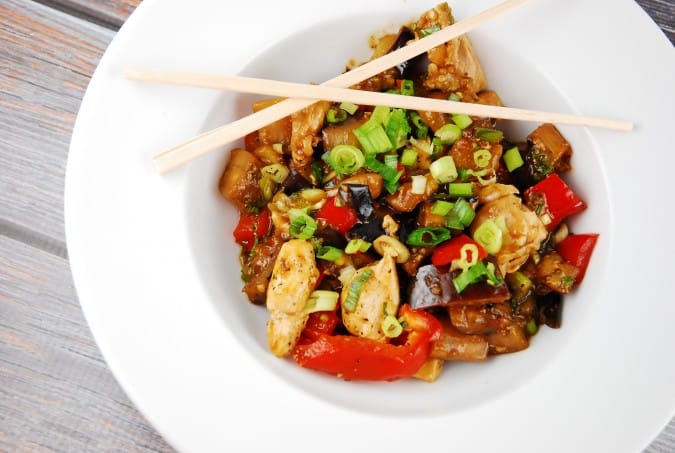 In an attempt to use up an organic eggplant that I bought before it went bad, I decided to put together a quick and easy Weight Watchers stir fry recipe that would have a Szechuan flair. I just diced up some chicken breast, my eggplant, and a red bell pepper and cooked them with an incredible sweet and spicy sauce. It was all ready in less than 30 minutes, and it was absolutely delicious! I used a bit more oil in this recipe than usual because the eggplant is very porous and soaks up a lot. Next time, I may try hovering over it a bit more, and adding broth, tablespoon by tablespoon, instead of more oil, to save a few fat grams (and maybe a Point). But I DO love the flavor of that sesame oil, so perhaps it’s worth it. :) I felt that this Chicken and Eggplant Stir Fry Recipe was just as tasty as the ones I get at my favorite restaurants, but a LOT healthier, and a great “deal” at just 6 Points per serving.

Just as tasty as the fast food version found at your favorite restaurant, this healthy stir fry recipe is a hit. It’s packed with fiber and protein, and is smothered in a deliciously sweet, tangy and spicy sauce that will definitely perk up your tastebuds.