I’ve really been trying to up my enchilada game lately. They’ve always been one of my most favorite Mexican foods that I consistently order at Mexican restaurants, but I knew that I could easily make my own lighter, healthier enchiladas at home.

So I’ve been experimenting in the kitchen, and my favorite version so far is my Chicken and Black Bean Enchiladas Recipe. It is PACKED with chicken breast, black beans and corn – all zero Points foods with the new Weight Watchers Freestyle plan! 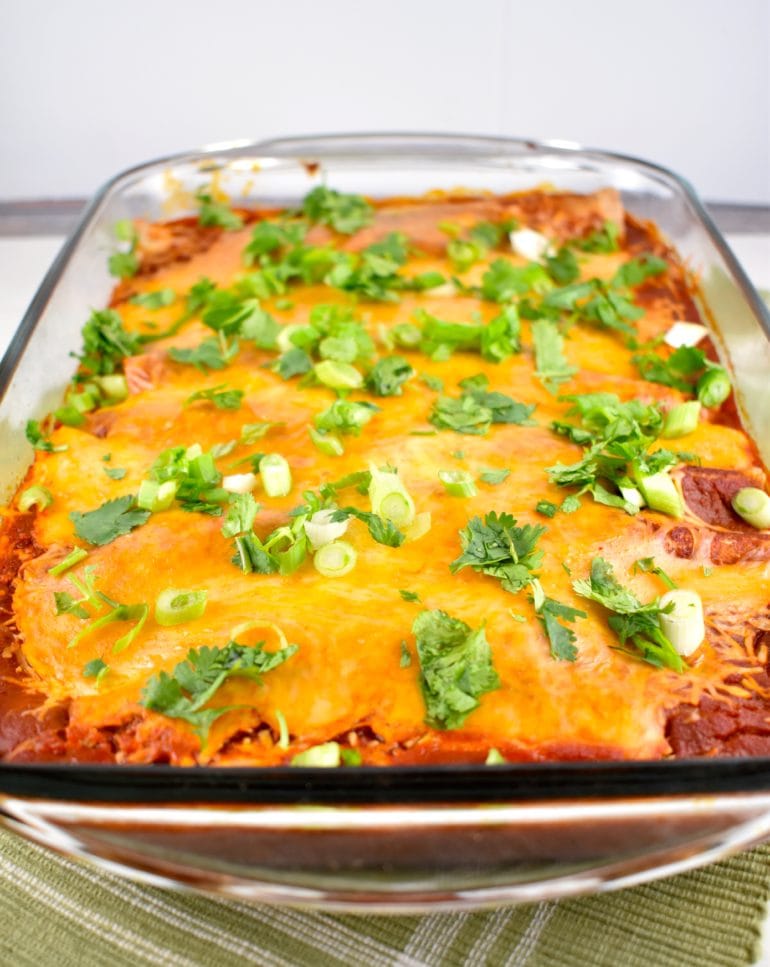 This helps to make the enchiladas incredibly filling and satisfying. Because, let’s face it, there’s nothing sadder than a thin, flat, flimsy enchilada.

But the secret to kicking these enchiladas up a notch was the sauce. I really wanted to try to make my own enchilada sauce, and not use the canned ones. But I assumed this was going to be a tedious process that would take lots of time, ingredients, and effort. 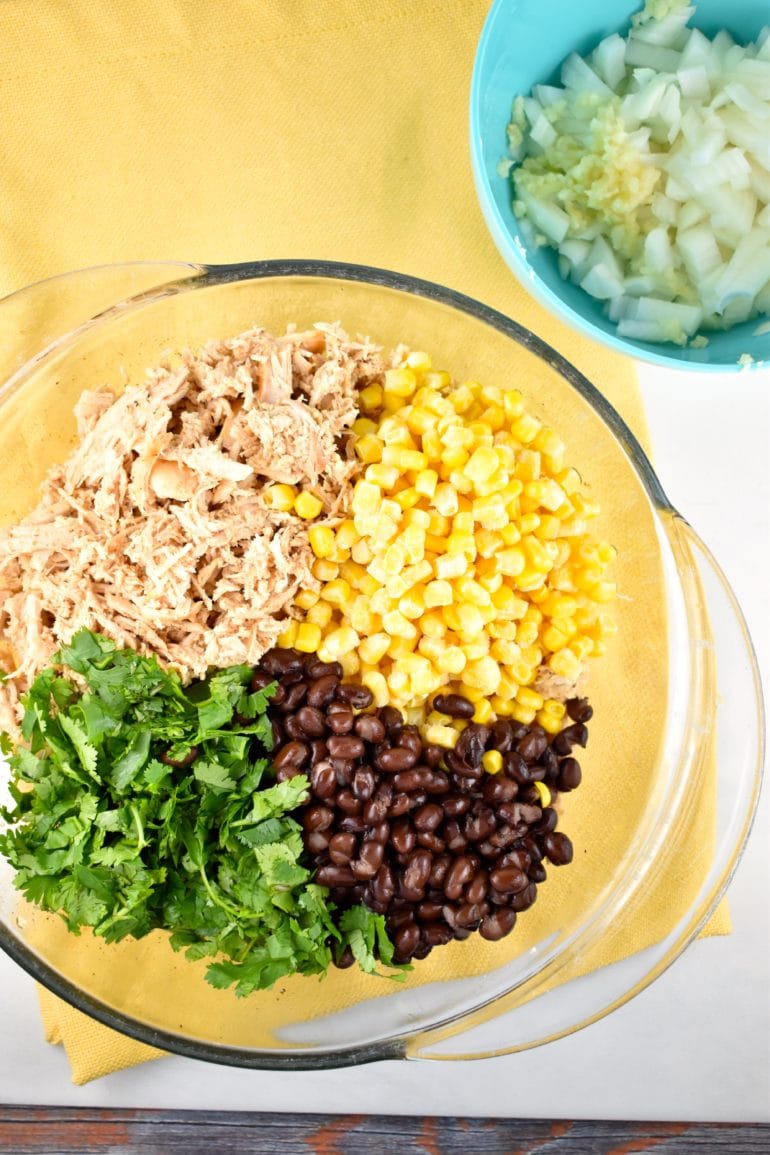 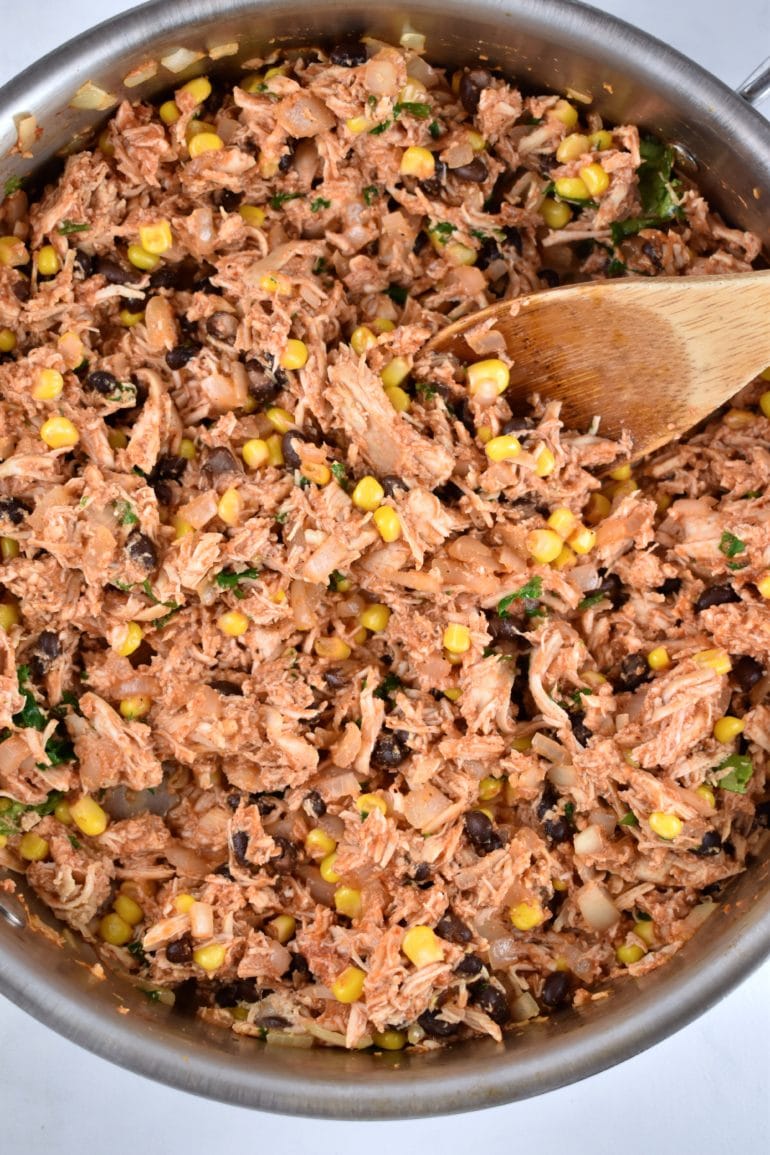 HOW TO MAKE ENCHILADA SAUCE

It’s time to ditch the canned enchilada sauce, and make your own instead! And it’s really not as complicated as you think. With just a few simple ingredients and steps, it’s never been easier. And without a doubt, this is the best enchilada sauce recipe ever! Once you’ve tried it, you’ll never use the canned version again.

To make your own enchilada sauce from scratch, just start by heating olive oil in a saucepan over medium high heat. Then you’ll combine tomato sauce, chicken broth, garlic, ground cumin, chili powder, and chopped chipotles adobo sauce. Let it come to a low boil, then turn heat down to low, cover, and let simmer for 10-15 minutes. Season with salt and pepper as desired, and your done!

Another extra step I took was to roast my chicken breasts. I did this simply because I REALLY wanted chicken enchiladas, but didn’t have any leftover pre-cooked chicken on hand. But, once I tasted how much flavor that freshly roasted chicken brought to this dish, I realized that it was worth that little extra bit of effort. 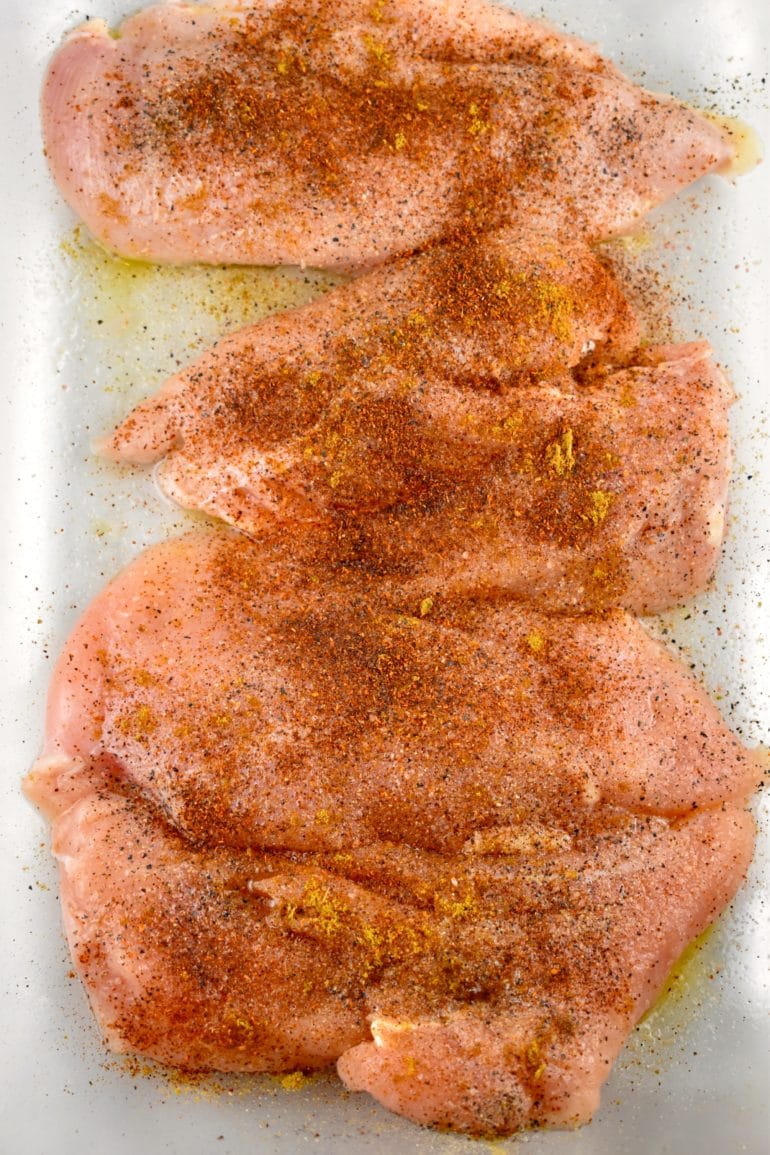 If you don’t feel like cooking the chicken, or you just simply don’t have the time, don’t worry – you can absolutely use pre-cooked, leftover chicken.

The end result was perfection. Seriously, this was the best chicken enchilada recipe ever. And I promise, you will not regret taking the extra bit of time to make that sauce! You might even want to double or triple the recipe so you can freeze the extra! 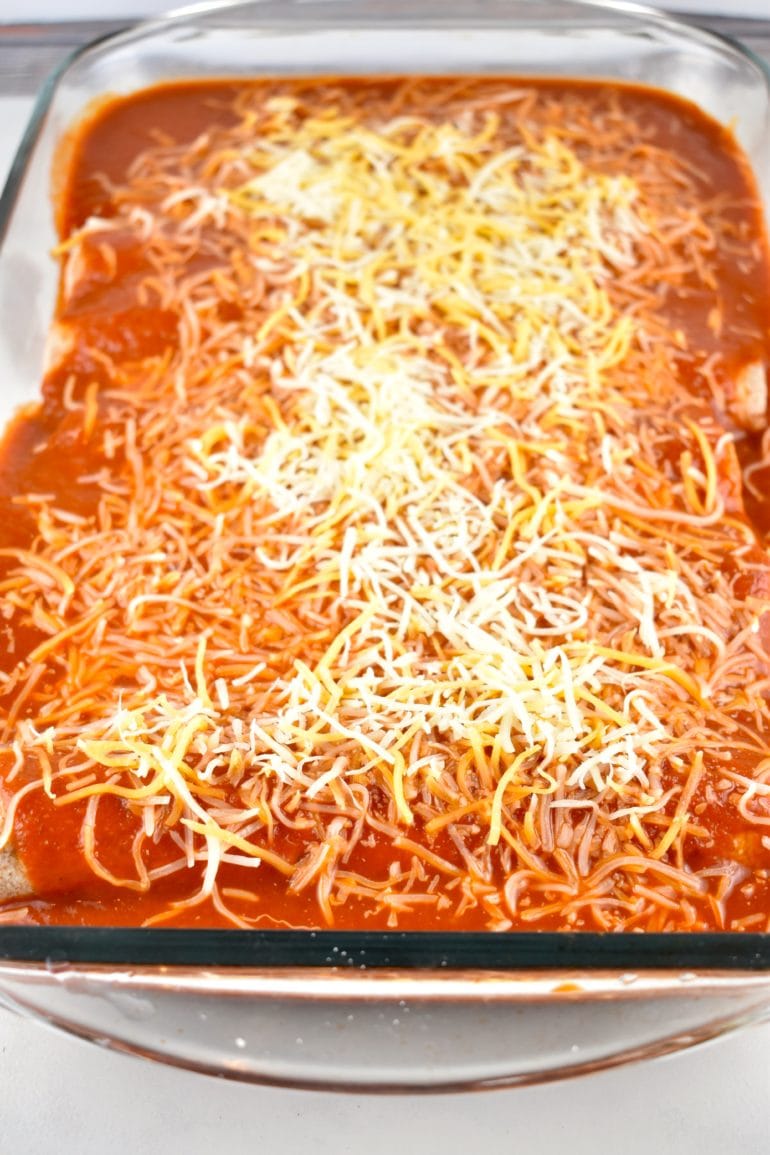 And now these Chicken and Black Bean Enchiladas have become my go to dish for everything – when I need to take a meal to a friend, when I need to bring a dish for a potluck, when I want to make a freezer meal, and when I need a Cinco de Mayo recipe. They never fail me.

You can jazz them up with extra toppings if you’d like – sour cream, jalapenos, chopped onions, cilantro, avocado – you know the deal. 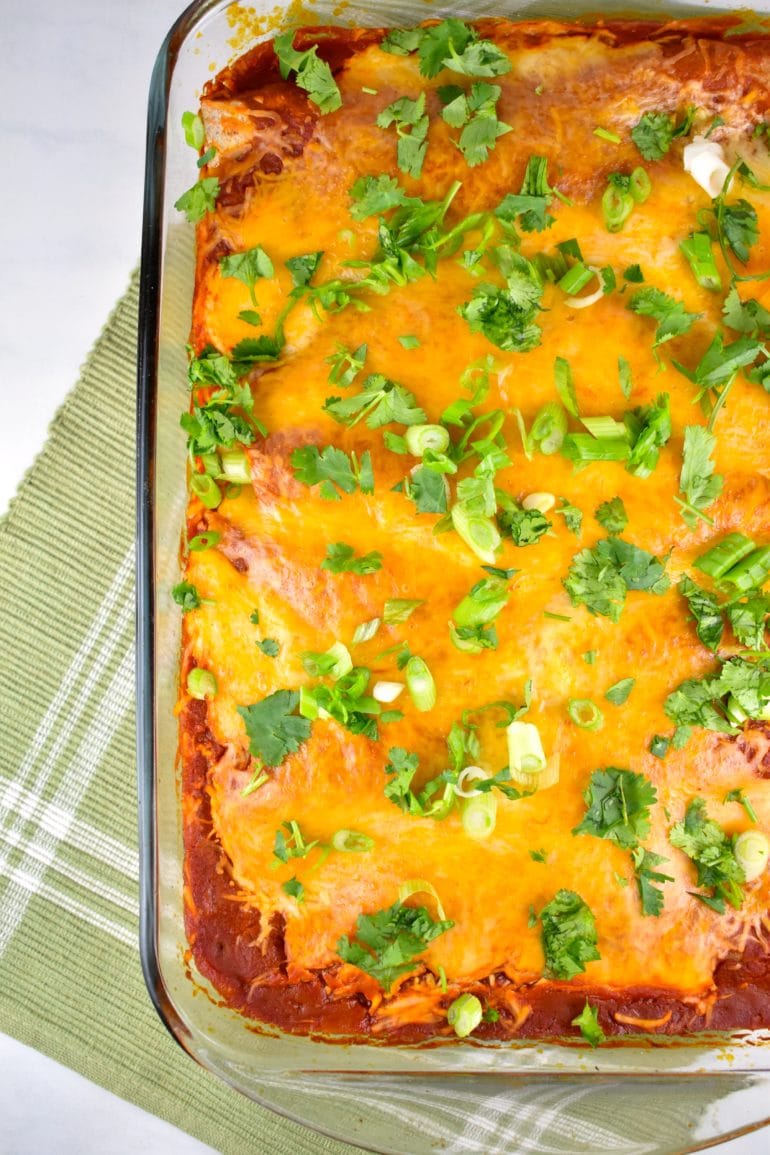 But you’ll be thrilled to see how incredibly satisfying these enchiladas are. A serving is TWO enchiladas, not one. I mean, really, who eats just one enchilada? 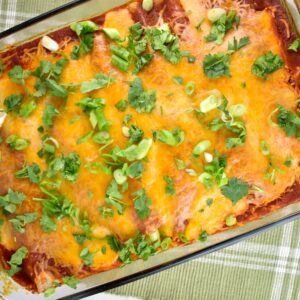 Make your own homemade chicken enchiladas from scratch, that are just as delicious as any restaurant. It’s the best chicken enchiladas recipe I’ve ever tried, and it’s made with the most amazing and easy enchilada sauce.
No ratings yet
Print Recipe Pin Recipe
Prevent your screen from going dark
Prep Time 15 mins
Cook Time 50 mins
Total Time 1 hr 5 mins
Servings 4 servings
Calories 340 kcal

FOR THE ENCHILADA SAUCE